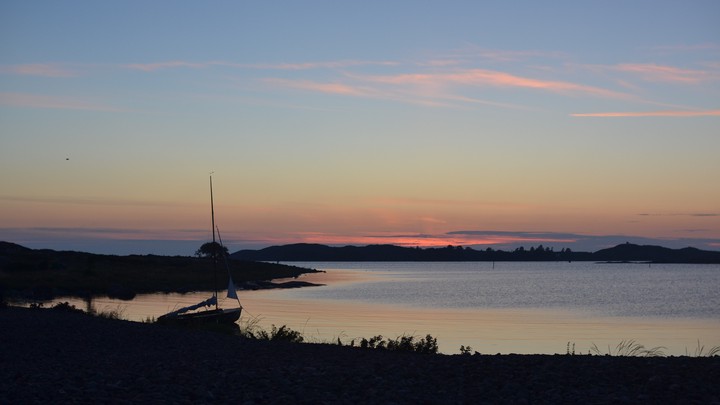 Jurmo, an island in the Archipelago Sea, has charmed many nature travelers and photographers for good. It’s a distinctive romantic island which has something to see in any time of the year. For many visitors it becomes obvious that they are going to want to revisit the island one day again.

For a long time we had dreams to make a trip to Jurmo. Naturally going there has many challenges, as in addition to the long car ride, you have to pay special attention to the conditions because sailing distance from the continent to the island is relatively long. Sailing in the outer archipelago can be harsh, so it’s important to follow weather forecasts carefully. It’s also good to take into account the past days as swell can have plenty of energy stored which becomes activated if the wind builds up, making the waves scary.

Finally, the weekend in mid-July looked almost perfect in terms of both weather and other commitments. So, we packed both the boat and the car and drove about 350 kilometers to overnight in Kaarina.

On Saturday, we woke up before six o’clock. After the morning chores, we drove through the island of Kemiö to the ferry which took us to Rosala. There, with my wife and youngest daughter, we launched the boat and started sailing in a wind of about 12 knots.

After getting through the gusty straits near Rosala, we reached larger waters at Lammörs fjärden, from where the east-west “gutter” runs fairly straight to the north of Utö. When sailing in Saimaa, you see other sailboats quite rarely. In the Archipelago Sea in July, however, the situation was quite different, with many boats approaching and passing by. Knowledge of the collision prevention rules was helpful in that setting, even though we were sailing mainly on the side of the fairway. On the other hand, watching the other boats brought a quite interesting activity, and we also noticed that many sailors passing by used their binoculars to observe Sarastus more closely.

The wind blew from the southwest about 9-11 knots the whole way, which is why we managed with only little tacking, but we had to sail close-hauled most of time. As the end of the journey approached, there was a slight increase in wave height in the outer archipelago, while the wind speed remained virtually unchanged.

Our 32 nautical mile journey took 7 hours to complete. Sitting for so long on one side of the boat with head turned almost all the time to the left made you feel quite numb. Still, experiencing the proportions of the archipelago sea in beautiful weather was nice, even though I myself got almost soaked due to the splashes, but still didn’t feel cold. The crew had more waterproof clothing.

Due to the splashes, the camera got some salt water inside, that caused some dysfunction that whimpered throughout the weekend. The functions recovered gradually. Fortunately the smart phone camera played well and could be used as a backup.

After six o’clock, we landed on the isthmus opposite Jurmo haven. The stern line was tied around a dark lonely rock on the shore.

Along the way, we had eaten a light snack only, so now it was time for a more hearty meal that we prepared on the rocky shore. The food was so delicious at the end of the exhausting sailing!

There were other visitors to the island in addition to us. The haven was filled with different kinds of boats, but there were also some people who had come on the connecting ferry to the camping area on the Moringharu headland. We came to chat with them, and a couple of them were even interested to know the type of our beautiful boat.

After eating and setting up the tent, we set off on an expedition. We climbed the highest cliff on the island, from where it was nice to look at the scenery in different directions. The village of Jurmo was also visible from the hill, but unfortunately we did not have time to visit there.

There are cross-country trails on the island, and it was good to walk them towards the eastern tip, which we wanted to visit.

The vegetation of Jurmo is charmingly unique and rich. In some parts of the island, heather and shallow junipers form a fabric with woods and rocks here and there. The overall look of the island is fascinatingly rugged.

The expedition to the eastern tip was longer than we expected. Of course, it could have been seen on the map in advance, but on land we want to take navigation a little more relaxed. Before long, we reached the easternmost point of Jurmo at the tip of the cape.

The day was already long, and the sunset was at hand. The fine mist, the golden rays of the setting sun, the sounds of the occasional birds flying past and the warmly blowing breeze created a fabulous atmosphere that was worth experiencing. Looking at the landscape, you felt like you were part of a painting.

The night started, so it was time to start getting back to the boat and go to bed. However, the charm of the island still lured admiring the scenery and taking pictures bit more.

The rest of the family went to sleep in the tent, but I wrapped myself under a tarp in a sleeping bag on Sarastus' floor. Small waves rocked the boat as the wind over the isthmus occasionally breathed some fresh air into the bottom of the boat. What a perfect place to fall asleep!

In the morning the awakening was early again as we wanted to get on time to the ferry. I cooked some quinoa porridge for myself while the rest of the family was content with oatmeal.

I checked the weather forecast on my smart phone but it hadn’t changed since the previous day. The forecast predicted a breeze of 9 knots shifting between southwest and south. As such, there would have been plenty of margin in terms of wind speed, as the voyage would begin with broad reaching and then change to running.

We packed the gear into the boat and then carefully checked that no litter was left behind. We finally got to start the return journey after eight o’clock. When Jurmo was left behind, there was a kind of contradiction in our minds. On the one hand the island was an magnificent experience, but on the other hand it would have been nice to stay there longer.

On the way back, the wind was slightly lighter and it was mainly about beam reaching. This made the journey more relaxed, also giving more time observing the surroundings with binoculars and shooting pictures. At first, there were fewer other boaters, but as Vänö approached, there were more comers and goers.

We arrived in Rosala at about three o’clock after sailing 28 nautical miles. After quickly recovering the boat we drove to the ferry. However, there was a long queue of cars before us, which is why we couldn’t quite fit on the ferry of four o’clock. The next departure was in 90 minutes, and we got on board without any issues. We arrived at the home after midnight. Falling asleep was an instant when your head touch with a pillow.

The trip to Jurmo was definitely outstanding. I have to say that after visiting the fascinating remote island you really want to return there one day. Did Jurmo manage to charm us too?